LoRa is a proprietary chirp spread spectrum radio modulation technique for use in a low-power wide-area network (LPWAN). It is a WAN specification designed to enable long-range, low-bit-rate communication among “things” (i.e., connected objects) such as battery-powered sensors, and it uses license-free sub-GHz radio-frequency bands such as 196, 433, and 868 Mhz in Europe and 915 MHz in North America and Australia. An LPWAN may be used to create a private wireless sensor network or a third-party service or infrastructure.

The Wzzard LRPv Node and SmartSwarm 243 Gateway support wireless long-range network communication without the need to pay telecommunication fees, thus reducing network operating costs considerably. This is particularly pertinent for reducing the cost of flood monitoring because most water bodies are large and do not have control centres located near them. Furthermore, traditional wireless solutions (e.g., access points) have a limited data transmission range and thus force users to adopt an intensive approach to node deployment. Even though cellular routers are unaffected by such problems, they require paying telecommunication fees. Furthermore deploying cellular router for simple sensing node may become cost prohibitive.

IP stands for International Protecting Marking, which is a classification system for rating the degree of protection against hazards such as dust and water. With an IP66 rating, The Wzzard LRPv Node and SmartSwarm 243 Gateway are protected against ingress by and contact with dust as well as powerful water jets. The dual-power design of Wzzard LRPv Node (DC/battery) and SmartSwarm 243 Gateway (solar/battery) also means that users have multiple deployment options. 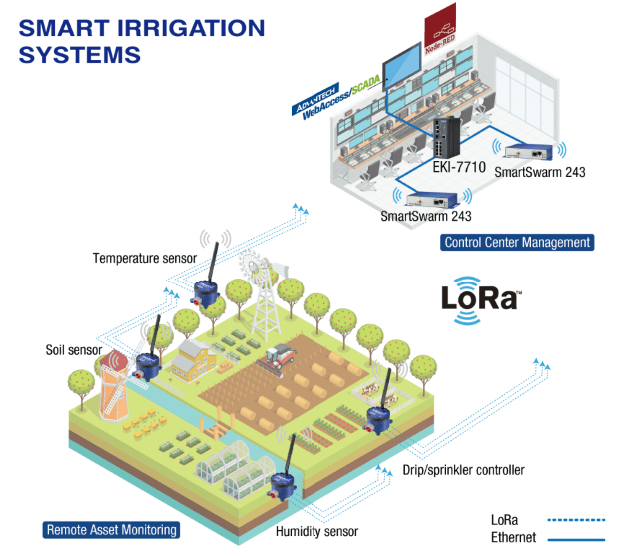 Advantech Wzzard Nodes are ideal for irrigation sites because the presence of water, mud, high humidity, and airborne water droplets/ dust at these locations poses a constant threat. With its dual-power design, the Wzzard LRPv Node frees users from having to install extra cabling and thus reduces costs while simplifying deployment. Additionally, the user-oriented design of the SmartSwarm 243 Gateway ensures deployment is user-friendly. This technology does not mean that you need to replace your existing pipes and pumps—incorporating IoT technology into your network does not render your current equipment obsolete; rather, it simply makes your network smarter.

Advantech’s Wzzard LRPv Node can connect up to four sensors simultaneously and is ideal for production lines that have many sensors or for applications where there is limited space for additional devices. The software is specifically designed to be customisable so as to accommodate the most sophisticated of monitoring plans.

Because the Wzzard LRPv Node offers high flexibility in both hardware and software aspects, it frees users from having to deploy an infrastructure-heavy wireless network, meaning that resources can be allocated to other more critical investments. 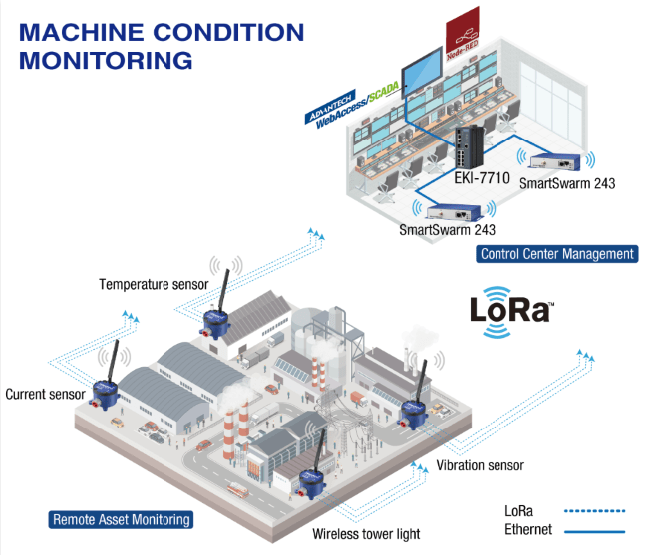 Utilise already installed control system such as PLCs and SCADA or you can use Node-Red application available on the gateway unit. This is particularly flexible and cost effective solution as control, monitoring and visualisation can be deployed as part of the overall system, all-in-one.

Dureco can help with pre-configuration, commissioning assistance, proof of concept set-up and more as individual requirements vary case by case.